Step #2:
Get Her to Accept That You're Trying to
Get in Her Pants 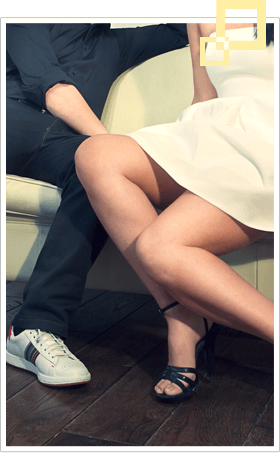 This step is based on the psychological principle of commitment and consistency, which simply means is that if someone agrees to something they're going to be much more likely to do it than if they never agreed to it.

So you'll use this same principle to get the girl to accept you hitting on her and eventually imagine having sex with you.

The idea is that by telling a girl you're hitting on her, or telling her that you're going to hit on her in the future, if she doesn't leave or end the conversation, she's giving you permission to try to get her into bed.

As an example, you might say: "Oh, my God, you've got to stop being cute, I'm totally going to start hitting on you."

If she‘s laughing, giggles and accepts this, then you can move on to the next part.

Say something like, "I'm really glad that we met because I think that we're going to be really, really good friends, and I mean that even though I'm definitely trying to get in your pants. So I hope that no matter what happens we can be friends."

The idea is you're getting her committed to the fact that you are trying to have sex with her, now at any point if the two of you ever hang out later on that night, or on a date, she knows the agenda is on the table.

This lets you move things forward without feeling bad or ashamed or anything like that because you were upfront with your intentions, but in a very fun, non-threatening way.

When you use it you can unashamedly hit on the girl as much as you want because you've told her exactly what's happening in advance.

Next, you need to spark "sexual attraction"...we'll cover that in a minute.

And what's great is when you're not hiding the fact that you're hitting on her, sexual attraction comes much easier. We'll cover more details on the next page.